I have a really itchy rash right now, thanks to a new deodorant that I will never buy again. (That's really not important, but I share just to illustrate why I thought of this particular story right now, and to prove that not everything floating around in my head is completely random.)

So as I was working my way through a tube of hydrocortisone cream, and whining to myself about how annoying rashes are, I wondered what it was in this particular deodorant that I am allergic to. That of course made me think of my "other known allergies." None of them led to a likely culprit, but thinking about it did remind me of something kind of funny.

When I was admitted to the hospital before having my daughter, the nurse who did my paperwork took a very thorough history, and it took a really long time, because I have so many things wrong with me. But she was determined not to miss anything. So when we got to the "allergies" section, I said something to the effect of "No. Nothing relevant." To which she replied "Oh, no. I'm not leaving anything blank on you." (Thanks for the subtle dig about how complicated I am, by the way. That's a wonderful thing to do to a pregnant woman.)

So I kind of rolled my eyes, and said "Well I'm allergic to horses, but I don't think that's going to be an issue here in the hospital." The sarcasm was apparently lost on her, because my hospital records now include an alert that I am allergic to horses.

Thanks to the many complications I encountered during the pregnancy, that hospital stay lasted nearly three weeks before my daughter was finally born. So that was three weeks of every new nurse, or aide, or anyone else that walked into my room with my chart saying "Ok, and you're allergic to..." [looks down at chart, then up at me with a confused look] "...horses?"

The confused look, coupled with the am-I-talking-to-a-crazy-person? tone of voice suggested that they thought I was the one who felt like my horse allergy was a necessary component of my hospital records. Like I was afraid that there was a good chance that I would encounter a horse during my stay, and was thus trying to prevent it. So each time I explained why it was in my chart, hoping that they would understand the sarcasm and stop looking at me like that.

In retrospect, it probably would have been a lot funnier if, instead of explaining the back story, I had just pulled the blanket up over my head and yelled "Yes! Please don't let them come in here again!" On the other hand, that just might have landed me in a different ward of the hospital, so I guess it's probably best that I didn't do it.

Email ThisBlogThis!Share to TwitterShare to FacebookShare to Pinterest
Labels: Allergies, Dealing with Doctors and Nurses, Sarcasm

Uh, oh. Two sci-fi references in a row! Well, I may be awesome, but I never said that I wasn't a geek. You learn to live with it.

I've been feeling lately - and maybe you have too - that we've just about covered everything we need to cover about my surgery. You've shared it all with me from the beginning, and heard all about the ups and downs. And I thank you for that. It's been very cathartic for me. Hopefully it's been entertaining, and maybe even educational, for you. But before I close the book on my surgery, there is just one more thing I want to share.

My kids have really gotten in to the idea of me having a spinal cord stimulator. Being three and four years old, they obviously don't really know what it is. But they do know that I have a battery inside me (there were a lot of long, interesting conversations there) and they know that it makes "Mommy's owie arm" feel better. And one of the most fascinating things in life for them is when I turn it on or adjust the program. 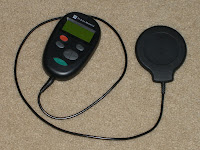 This is the external controller. I just hold the round part against my skin above where the battery is implanted, and it sends the signals to turn the stimulator on and off, and adjust the programming however I need to. On worse pain days I can turn it up for stronger pulses, and I can turn it back down when I don't need quite so much. It's pretty cool. And the kids love helping me adjust it. As soon as I open the case, my three-year-old says "Mommy can I push the button?" and then my four-year-old says "What can I do to help?" So I point to the button and let them each push it once, and they are absolutely thrilled that they get to help Mommy feel better. It's pretty adorable.

So that, technically, is how I control the stimulator. But the cooler thing that I've learned is how much control I have over things through the slight movements of my body. For example, if I tilt my head down or to the right, it makes the stimulation stronger on the left side. If I stretch forward and to the left, it makes it stronger on the right side. So periodically throughout the day you're likely to see me cocking my head at odd angles for seemingly no apparent reason. I'm sure it looks crazy, but it helps me make small adjustments to the stimulation, and get the best results where I need them. Plus, it totally makes me feel like a Jedi.