It's Monday once again, my friends. And as always that means it's time to reflect on the things that made us happy over the past week. And of course now is also the perfect time to set the tone for a great week to come!
If you missed my take on LML, you can find it here. If you missed the explanation of LML Monday, you can catch up here.

I know the blogging has been a bit patchy lately, but like I mentioned yesterday things seem to be getting a little bit back to normal. And even if they aren't completely there yet (or don't stay there) I've decided that LML Monday needs to be back, and needs to be a constant. Because I feel better when it is. So here we go, back on track...

Play Dates
My kids and I have a tradition, going back to the beginning of last school year when my son started kindergarten. Every time they have a half day at school we take advantage of the free afternoon and go out to lunch (usually at McDonald's, because in a town this size there aren't all that many options.) We always have a good time. And there is usually ice cream involved, which also helps.

At some point our lunch dates began to evolve, as we started to get to know some other families from school and make some friends. Sometimes it's still just the three of us for lunch (which is still fun), but sometimes (like this past week) we're able to meet some friends there and make an actual play date out of it. Spending a couple of hours at McDonald's is even more fun when the kids have friends to play with, and I have other mom friends to talk to.

When you're a mom (especially a stay-at-home mom) your exposure to grownup conversation can sometimes be kind of limited. Don't get me wrong - I treasure every minute with the kids, and wouldn't trade it for anything. But having another mom or two to spend some time with now and then is a great way to relax and recharge, and it always makes me feel better.

Pine Cars
This past weekend was the first Pinewood Derby of my son's Cub Scout career. Sadly, none of our cars did all that well, but we still had a great time. And we got some ideas and learned a lot about what we can do better next year, so it's good that this is an annual event. :) 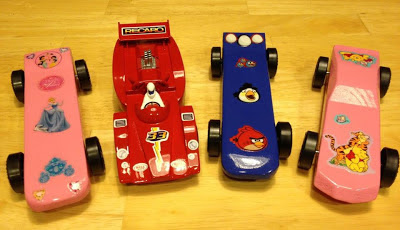 These cars might not have been the fastest, but they sure did turn out cute, didn't they? Family craft projects are always a hit in my house, so these made for several fun weekends leading up to the race. (And lots of hard work - mostly on Dad's part, but I like to think that the rest of us contributed a little.) My son didn't even care at all that he didn't win - he still loved his Angry Birds car.


Ok. I shared mine - now it's your turn! Please feel free to leave me a comment and share some of your recent LML moments. Focus on the happy thoughts, and have a great week!

Posted by Melissa at 1:44 PM No comments: Links to this post

Enough, and Then Some

I've never seen the movie Snakes on a Plane. (Never felt a need to, actually.) But there is one relatively well-known and sometimes-quoted scene that I am familiar with - and chances are some of you are too, considering that it's sometimes called "THE line" from that movie. It's the moment when Sam Jackson's character decides that enough is enough, and he's finally "had it!" (Said in the signature Sam Jackson style, of course.)

I think we've all probably been there a time or two. Granted, it probably didn't have anything to do with snakes, and we probably didn't give a speech and then shoot out an airplane window... but we've all had those moments when we finally have to say "enough is enough!"

I reached that moment a little while ago. Because it has been, to put it mildly, kind of a rough couple of months. (You might have already guessed that, since we're almost to the end of the month and this is only my second post. Following not many more than that last month.) Sadly, the majority of my existence since just before Christmas has been all about taking care of sick people, so I just haven't had much time for anything else.

Everyone is mostly fine now, so not to worry. But it was rough. And after the second trip to my son's pulmonologist in just over a week, and having him miss school again, and having to take care of all the medications and inhalers and nebulizer treatments and everything else that goes with having a really sick kid.... I was definitely feeling the stress. And starting to be grumpy.

I was feeling the pressure, and letting it get to me. And yes, having myself a little pity-party. Poor me, with all the stress of having things piled on, one after another, like it was never going to end. And that's when I finally broke, and said "I've had it!" And as soon as I said that, I realized that what I'd had enough of was not so much about what has been going on, but how I was reacting to it.

Sure, life piles it on sometimes. And yes, it can start getting to us after a while. But the woe-is-me attitude can only last for so long before we have to make a change. And since there wasn't really anything I could do about my son's illness other than what I was already doing, it was easy to figure out that the change had to be in where I chose to focus.

So like I often do, I tried looking for the good things anywhere I could. At first it wasn't easy, and I had to kind of stretch it a bit. Like, at least it was my index finger that I hurt, so the bandage was easier to keep dry than it would have been on another finger. Yeah, that works. There's something to be happy about.

Then I started finding other little things. Like the new electric cork screw that I got for Christmas. So now I don't have to wait for my husband to get home before I can open a bottle of wine. Score! Or the season premier of White Collar. Always a thing to be happy about.  And I discovered that Netflix just added some of the missing episodes of Dr. Who, so I finally got to see some things that I missed. Awesome!


Oh, and this doesn't have anything to do with anything other than the fact that it always makes me smile. I didn't post a clip of the original scene that I was talking about, because I wanted to spare you the profanity. (If you really want to see it, you can look it up. It's not that hard to find.) But this scene is famous for another (and I think funnier) reason. Here now for your viewing pleasure, I give you the worst TV edit fail or all time:

Posted by Melissa at 9:36 PM 2 comments: Links to this post

Email ThisBlogThis!Share to TwitterShare to FacebookShare to Pinterest
Labels: Appreciating the Little Things, Being a Mom, Being Sick, Changing Perspectives, TV/Movie References

It's Monday once again, my friends. And as always that means it's time to reflect on the things that made us happy over the past week. And of course now is also the perfect time to set the tone for a great week to come!
If you missed my take on LML, you can find it here. If you missed the explanation of LML Monday, you can catch up here.

I have to admit that it's been kind of a rough couple of weeks around here (which might explain the lack of recent posts.) The holidays were great, and having my family visiting from out of town was great. But having everyone who lives here and some of those who were visiting get sick was not great. Luckily I didn't get it too badly, but I've definitely had my hands full taking care of those who did.

So while I may be too exhausted most of the time to write much these days (at least until everyone is back to full health) I do at least have to share one thing that happened last week. Mostly because it made me laugh, and I figured some of you would appreciate it too.

In the one open night between when I got over being sick and when my kids came down with it, we got to have dinner with my sister and her family before they had to head back home. (It was lovely, yes. But that's not the funny part.) The funny part was when I ordered a Long Island Iced Tea, and the waitress asked me if I had ID. I said "um, yeah" with what I'm sure was a very confused tone of voice. And she said "Well, can I see it?" As if it was a given, and I was dumb for not expecting it.

I actually can't remember the last time I got carded. And I've made my peace with getting older. So I kind of chuckled and asked "Seriously?" She actually took off her glasses and tilted her head to get a better look at me, and said "Well, you have to look over 35." Ok then! I gladly handed over my ID and thanked her for the little pick-me-up.


Ok. I shared mine - now it's your turn! Please feel free to leave me a comment and share some of your recent LML moments. Focus on the happy thoughts, and have a great week!
Posted by Melissa at 10:17 PM 2 comments: Links to this post