The Thing About Glitter...

When my daughter and I painted our nails last week I let her pick out the polish. She picked what seemed like a nice pale pink, so was on board. But you know how sometimes what you see in the jar isn't exactly what you get when you put it on? This was one of those times.

As I painted, I realized that the polish had a bit of a sparkle to it. I went with it anyway, deciding that there was nothing wrong with a thirty-something woman having slightly sparkly nails now and then. It wasn't until I began to remove the polish this morning that I discovered the problem. For you see, that little hint of sparkle was actually silver glitter. Yep. There was glitter mixed into my nail polish.

Those of you that know me personally already know how I reacted when I realized this. It was something to the effect of "AAAAAAA!!! THERE'S GLITTER ON MY FINGERS AND IT'S NEVER  EVER EVER GOING TO COME OFF!!!!!!!" Yeah... I didn't take it well.

Why do I hate glitter so much? Because, as the saying goes, glitter is the herpes of craft supplies. All it takes is one exposure. And than, for the rest of your life, no matter how hard you try you can never, ever get red of it. Don't believe me? I accidentally touched some glitter back in 1982, and I'm pretty sure there's still a little bit of it in my hair.

Now, you know me - I'm not one to rant about something just for the sake of ranting. I'm the one that came up with a bright side to having kidney stones, right? I can find a bright side to anything. There had to be something. Just one small glimmer of hope. I wracked my brain all day. But it's glitter we're talking about... so I had nothing.

Finally I found it, and now I think I simply must have a print of it for my craft room. This picture is the only thing about glitter that has ever made me smile. :) 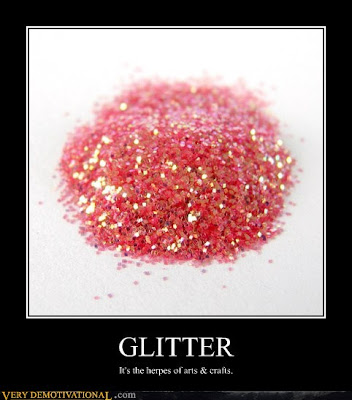